I have a problem. My problem is that I like Macbooks, but I don’t like macOS. macOS is just enough like Linux to feel familiar but different enough to make that feel like an uncanny valley and frustrate my workflows. So anyone who has read this blog knows that back in 2018 I switched to a T480 and couldn’t have been happier. Couldn’t have been happier is probably an overstatement. I hated that hardware. The keyboard was excellent, because that’s what ThinkPads do, and I was coming from MacBook. Still, everything else (especially the screen) was atrocious.

I recently did a stint in England, where I was forced to use that laptop as a laptop for 3 weeks. The entire time I was daydreaming about having my Macbook with me instead. This experience motivated me to seek out other options. I needed a machine that could replace or be better than my Macbook in terms of hardware but run Linux. I found this MacBook replacement in the owner of the “New XPS 13” developer edition.

A brief aside about model numbers

If you’re looking at the words “New XPS 13” and wondering why they’re in quotes that’s because that’s what Dell calls this thing as seen here:

Confusingly this model does have it’s own model number; that’s an actual number, but that XPS model number (7390) corresponds to a very different XPS product (Dell XPS 13 2-in-1). Are you confused? I was too. I have no idea how you’re supposed to separate this from the other Dell XPS 13’s other than to call it the “New” one. The “Old but not called out as old on the website XPS 13” has a unique model number: 9380, so why isn’t the 9390?

Dell is lucky the product is unique here because this is terrible UX for reviewers and consumers alike. I spent weeks waiting on my delivery constantly in fear that I had somehow purchased a 2-in-1 because looking for reviews like this one only showed me that model. Also, their website still sucks. Ironically when re-reading my T480 review to write this one I found, I cited that as one of my reasons for selecting the T480 over a Dell XPS at the time in my T480 review:

The second reason is just how damn hard it is to find on Dell’s website. I spent a solid 30 minutes just trying to find it and see my customization options. Then I clicked on the wrong one and get kicked back out to Windows only options. Maybe I’m an idiot, likely to be true and unrelated, but I felt that if I had to work that hard just to find a laptop with Linux on it I didn’t think Dell was really “all in” on Linux laptops so it turned me off.

Thankfully after hearing many interviews with Dell’s Linux team and the expansion of their product line, I do believe that Dell is “all in” on Linux laptops now.

The design of the machine is one of the main things that drew me to it. I am not a large laptop person. I need something that fits in trains, planes, and NYC coffee shops (which often have less room than the former). This requirement is why the idea of an 11-inch laptop with a 13-inch screen was so appealing. It’s smaller than my Macbook but has the same screen size. I feel like I’m looking at a Tardis whenever I’m working on it.

It otherwise has all of the features you would want from a small laptop, it’s insanely light, made out of sturdy aluminum, and it feels fantastic in the hand. In terms of build quality and the outsides of the machine, I have zero complaints. In my mind, it’s a strict upgrade over every other laptop in this regard.

The one thing that always failed me on my Macbook was the atrocious keyboard. The ThinkPad was terrific in this regard. The T480 had full depth and felt like having a real pseudo-mechanical keyboard with me everywhere. I would put the Dell somewhere between the two. It’s leaps and bounds above the Macbook, and typing on it for 8+ hours does not bother me at all. However, it’s not the same thing as a real keyboard, and I have a desk configuration that lets me use the laptop but with my favorite keyboard: 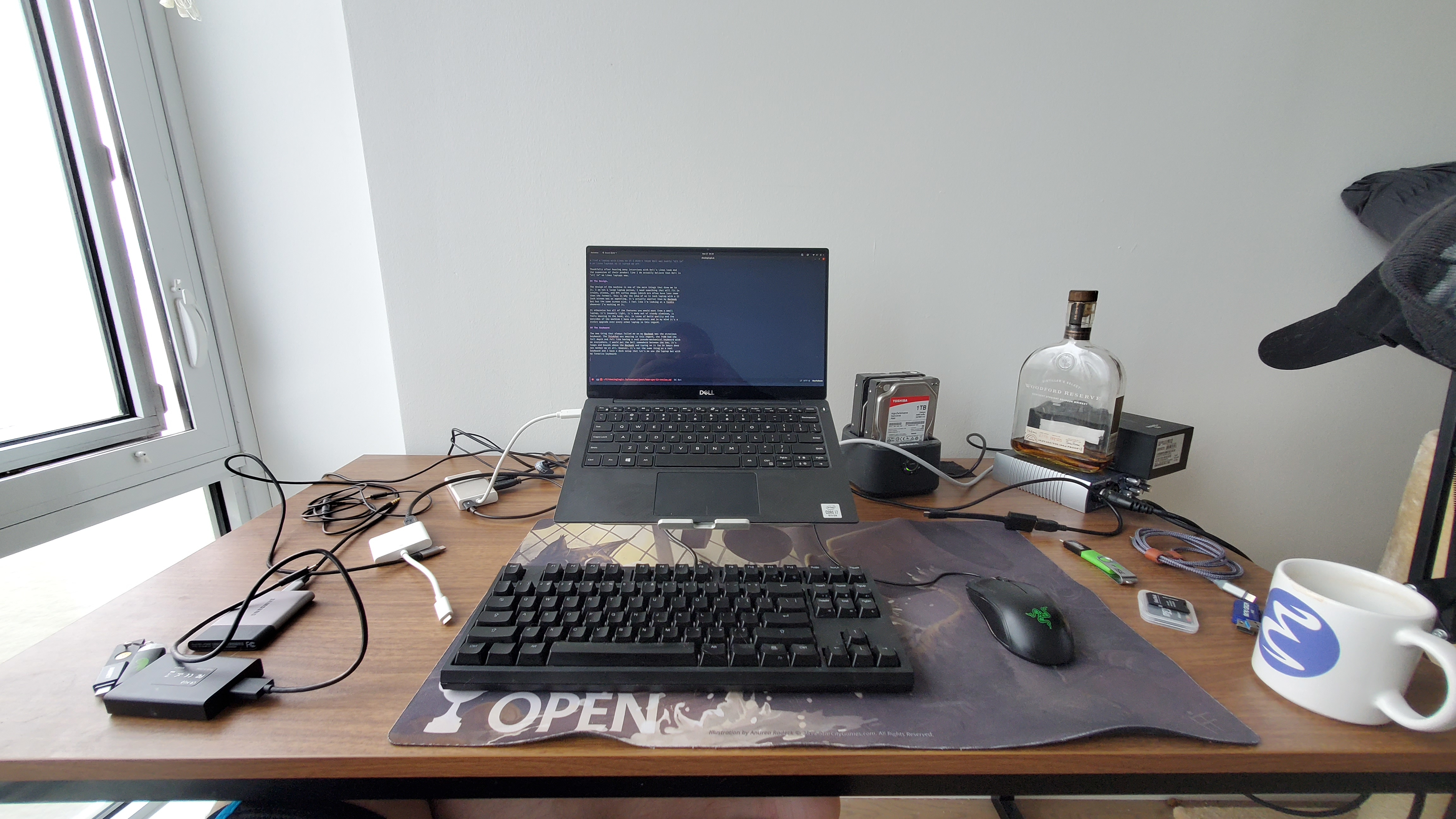 As you can see from the above picture, I don’t use a monitor with this laptop. I have a monitor at work that I do sometimes use, but the screen on this laptop is so beautiful it feels wasteful not to use it. I opted for the 4k model because I wanted to feel the upgrade from my T480, and I wanted to rival the retina display on my MacBook. And boy does it rival that Macbook display. It’s the only screen I’ve used on a non-Apple product that can get this bright and look this sharp. It seemingly infinite viewing angles, which has been helpful when sharing things with my coworkers. Though if you work in HR or some other data-sensitive field, you’re going to need a privacy screen with this machine.

The model I have carries 16GB of RAM, plenty for me, and a 1TB NVMe SSD. Memory is pretty much memory, but this disk is crazy fast. I was recently working on a build system performance improvement at work and was getting incredible numbers on my machine. For all my coworkers, even those with slightly older SSD’s, they saw double the amount of time. It took us a while to figure out that’s because the build system was stat‘ing every file in the source tree, and my disk was just that much faster at reads. All in all, nothing negative to say about the disk it’s perfect.

The CPU is an i7-10710U (Intel(R) Core(TM) i7-10710U CPU @ 1.10GHz). This CPU is Intel’s newest generation of low power processors, and this thing packs 6 cores and 12 threads. Cramming six cores into this laptop is what drew me to it initially as I work on a C++ codebase, so having extra threads for compiles is always a boon. I also was, of course, curious how they fit those extra cores on 15W TDP.

So you might be wondering what is the performance can you expect? Well, I can say without a shadow of a doubt: it’s excellent, with one caveat. When this machine is trucking on all threads, it can do some amazing things. However, if you’re running all the threads at full tilt for an extended time, the machine can grind to a halt. I guess that it’s a thermal issue because cooling a six-core processor in this size frame can’t be easy. However, I’ve been unable to test it to confirm because once the machine hits that point, it’s unusable. I’ve only managed to hit this condition when trying to link multiple multi-gigabyte-debuginfo-included static binaries at the same time. I would add that YMMV, and you may never hit this edge case.

The other caveat about the CPU is that it seems to get worse battery life. I think this is due to applications being greedy and trying to fire off more cores because they thing having those cores means they should use them (looking at you Firefox). I may also be unfairly blaming the CPU here, and it may come down to the 4K screen. Still, I can get an acceptable battery life when well-threaded programs are not running. IME with the 4K screen model, I get between 2.5 - 6 hours of battery life. Switching web browsers to Brave recently (review incoming) has made that a more consistent 4 - 5 hours. Don’t take this as a slam on Firefox. I’ve enabled some experimental features in my about:config that probably contribute to this problem. I enjoy playing with new experimental features of Firefox; I only do it when I’m connected to power now.

So overall, battery life is good, but nothing to write home about. If you want to squeeze every last bit of battery, definitely opt for the 1080p screen or go T480 and get the replaceable/upgradeable battery packs.

I purchased the “Developer Edition” (read: “Linux Edition”) of this laptop because I want to support vendors selling machines with Linux pre-installed. But most importantly, I did so because I want a machine that just flipping works with Linux no fuss.

I can say that with one very minor complaint, the XPS 13 Developer Edition runs Linux like a boss.

So what’s wrong with the Linux support? The machine comes with an OEM install that I planned on using (albeit upgrading) of Ubuntu 18.04, which I like. However, I can’t choose full disk encryption with the OEM installer. I don’t know if this is Dell’s fault, by misconfiguring during install, or Canonical’s fault in that the installer does not support full disk encryption with OEM installs. But either way, it was a mild bummer that my first task on my new Linux pre-installed machine was to re-install the operating system.

I’ve also tried Fedora and Manjaro on this machine. They both work great, so I’m sure if you, for whatever reason, don’t like Ubuntu, the distribution of your choice works just fine.

There’s one minor killer feature of this machine that I wish the T480 had. It’s tough to find a non-touch version of the XPS (and the T480 for that matter) with the higher-end hardware. I hate touchscreens and find GNOME triggers phantom touches all the time on them. On the T480, it was just a fact of life that when not in clamshell mode, the on-screen keyboard would randomly insert itself into my daily life, and there was nothing to be done about it.

The Dell XPS 13 has an option in the BIOS to disable the touch screen. I cried with joy when I saw this option and take my hat off to whoever decided that the option should exist at Dell. You’re my hero.

All in all, I would say I’m in very happy with this machine, and if you’re looking for Macbook Pro-quality running Linux, you need not look any further. In many ways, I prefer the XPS 13 to my Macbook Pro. 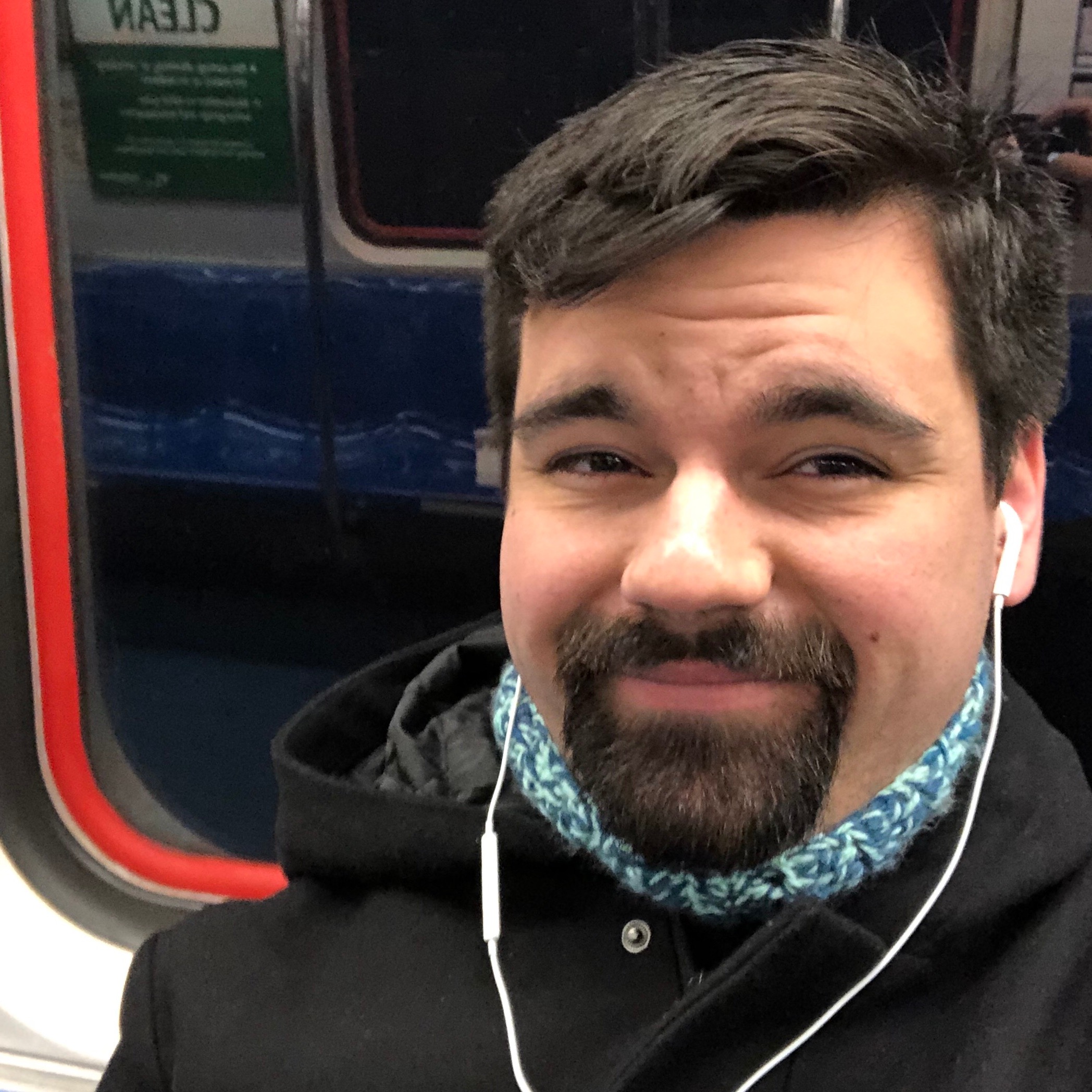